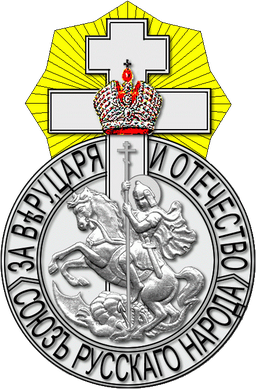 On November 22, 2004, a meeting was held in Moscow, chaired by the Russian sculptor Vyacheslav Klykov, the Coordinating Council for the Reconstruction of the Public Movement “Union of the Russian People” on the basis of the continuity of the pre-revolutionary Union of the Russian People. The founding (restoration, taking into account the declared continuity of the organization of the early XX century) Congress was planned for the spring of 2005, Klykov was elected the head of the Coordinating Council. The meeting, in particular, was attended by Mikhail Nazarov, Vladimir Bolshakov, Alexander Shakhmatov, Alexander Kalina, Alexey Senin, Anatoly Stepanov.[3][4][5]

Сthe ride was planned to be held in the Cathedral of Christ the Saviour. However, at first the congress itself was postponed for six months, and after that the administration of the church refused the organizers to hold the congress “for technical reasons.” Ultimately, the Congress took place in Moscow on November 21, 2005 (on the day of the celebration of the Synaxis of the Archangel Michael and other disembodied heavenly forces), in the Gorbunov Palace of Culture. Vyacheslav Klykov was elected the first chairman in the modern history of the Union. The Charter of the organization was also adopted. The governing body of the RNC – the Supreme Council, besides Klykov, included 60 more people, in particular: Konstantin Dushenov, Leonid Ivashov, Mikhail Kuznetsov, Mark Lyubomudrov, Boris Mironov, Aleksandr Mikhailov, Mikhail Nazarov, Vladimir Osipov, Sergey Provatorov, Alexey Senin, Anatoly Stepanov, Alexander Turik, Alexander Shtilmark.[6][7][8][9]

After the death of Vyacheslav Klykov in June 2006, GeneralLeonid Ivashov took over as acting chairman of the URP. In November 2006, Ivashov was elected Chairman of the URP at the II Congress of the URP. Many of Klykov’s associates considered Ivashov to be a non-church person and therefore were against the election. However, the spouses Mironovs and other supporters of Ivashov succeeded in attracting Sergei Kucherov’s organization (patriots–atheists) to the Congress, endowing it with voting rights, and many active members of the URP were not allowed to attend the Congress and were not given the opportunity to vote, and thus Leonid Ivashov received the majority of votes. The reception room and website of the URP were transferred by the Ivashov to Kucherov’s group.[10]

In his very first public speeches on the People’s Radio (1/12/2006), Ivashov stated that Klykov had “an Orthodox–monarchist marginal idea, it prevailed at the first Congress. But … I will not lead such an organization. ” In the next radio broadcast (2/14/2007), Ivashov said that Russian PresidentPutin “proved himself not only the leader of Russia, but also one of the leaders of most of humanity,” and declared support for Putin’s policies. Meetings of the Main Council of the URP Ivashov began to be held under the portrait of Stalin. This turn of the course caused protests from the former Klykov cadres, who declared this to be a serious violation of the URP Charter and ideology.

In May 2007, the opposition held the III Congress of the URP in Irkutsk, which was supported by nine of the twelve Klykovo regional departments. They announced the restoration of the traditional ideology of the RNC and elected Alexander Turik as chairman.[11] Ivashov’s supporters called it a split and did not recognize the decisions of the Congress.

In August 2007, the structures subordinate to Sergei Kucherov themselves rebelled against the “inactive”, in their opinion, the Main Council of the URP Ivashov, demanded that the last “idiots – monarchist autocrats, preachers in cassocks with a 1905 charter of the year” III Congress “. Kucherov published a programmatic article “Attempts to reduce the entire breadth of today’s views of Russians exclusively to Orthodoxy – the way to nowhere”.As a result, the URP under the leadership of Ivashov split into two wings: Ivashov’s and Kucherov’s.

In November 2008, L. G. Ivashov resigned as chairman of the URP and proposed to elect B. S. Mironov as his successor, but the majority of the members of his Main Council voted against. Mironov announced his resignation from the leadership. IG Starikov was elected temporary leader, but in January 2009 he announced his departure to the monastery. The URP (Ivashov) was headed by a triumvirate: N. D. Merkulov, V. F. Kalentyev, V. M. Erchak, subordinate to K. D. Grechnikov, who was not formally part of the Union, but served as a link between him and the state apparatus …

On April 26, 2009, the Mironovs held their congress of the URP, at which they announced the election of B.S.Mironov as chairman.

On May 30, 2009, the remnants of the URP (Ivashov) held their third congress, at which they elected DN Merkulov as chairman. At the congress, the possibility of uniting Turik with the URP was discussed, for which the deputy of Turik M.V. Nazarov was invited to present the positions.[14]

On October 18, at an expanded meeting of the Main Council of the URP Turik, it was decided to create a bilateral commission for unification and elect a general leadership at the future IV Congress.[15]

The merger of the structures of Merkulov and Turik did not work out, since Merkulov decided to create the Monarchist Party of Russia instead of the URP and in the fall of 2010 held its founding congress.[16] Thus, the Merkulov URP ceased to exist, all other URP structures no longer made themselves felt – except for the URP A.S. Turik. This URP, which originated from the structure of V.M. Klykov (2005), actually remained the only one that survived the schisms and increased its number to 45 departments and groups (as of autumn 2011).

In 2011, the chairman of the URP A.S. Turik, without approval from the Main Council of the RNC, entered the leadership of the Ethno-political Association «Russians» (Demushkin – Belov), as well as the autocratic party of Merkulov and the organization of Sergey Baburin. The Main Council did not approve of these initiatives. In the spring of 2012, A. S. Turik resigned as chairman of the URP. Since no one wanted to be chairman – the URP was for some time managed collegially by the Main Council.[17]

In September 2012, a group of heads of URP departments in Ukraine under the leadership of O. V. Zarubin (acting secretary of the SC), in violation of the URP Charter and the decisions of the RNC General Council, called on the Union to focus on the support of Russian President Putin: “the Russian government … began to defend our common national interests and embarked on the path of service, God-appointed power as an institution established by Him. ” Those who disagreed with this turn of the URP’s course were declared by Zarubin “enemies of Russia” and “accomplices of the CIA.” There was a discussion. On October 2, 2012, the URP Court of Conscience and Honor condemned the actions of Zarubin’s group as incompatible with URP membership and Orthodox norms of behavior. 10/20/2012 in Moscow, the Main Council of the RNC by a legal majority of votes expelled a group of Putin’s supporters from the URP.[18] At the same meeting, A.S. Turik was re-elected Chairman of the GS of the URP, as the reasons that hindered this had disappeared. Zarubin’s group, being in the minority, nevertheless announced the “exclusion from the URP” of the members of the Main Council and continues its campaign under the name “representatives of the South Russian divisions of the Union of the Russian People”.[19]