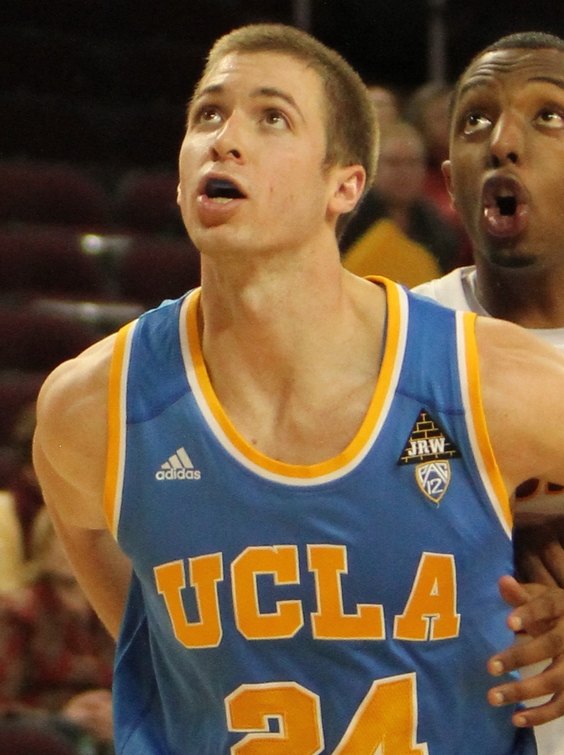 Travis James Wear (born September 21, 1990)[1] is an American former professional basketball player. He began his pro career with the New York Knicks after going undrafted in 2014.

Wear was an All-American in high school and won a silver medal with United States U-18 national team at the FIBA Americas Under-18 Championship in 2008. He played college basketball for the North Carolina Tar Heels and the UCLA Bruins. After playing one season with the Knicks, Wear played with San Sebastián Gipuzkoa BC in Spain for a year before returning to the U.S. to play with the Los Angeles D-Fenders.

Considered a four-star recruit by Rivals.com, Wear was listed as the No. 17 power forward and the No. 60 player in the nation in 2009.[3]

Wear and his twin brother, David, played for the defending national champion North Carolina Tar Heels in their freshman year.[4] Wear contributed 3.5 points and 2.2 rebounds a game while averaging over 10 minutes per game.[5] The Tar Heels missed the National Collegiate Athletic Association (NCAA) tournament, which upset their fans. Wear said playing for North Carolina “wasn’t what [he] thought it would be.”[4] The twin brothers transferred after the season in May 2010 to UCLA. They redshirted the following season due to NCAA transfer rules.[5]

In his first season playing for UCLA in 2011–12, Wear played in 30 games with 24 starts, and averaged 26.2 minutes per game and finished second on the team in points per game (11.5) and rebounds per game (5.9). He had a career-high 13 rebounds in a loss against St. John’s on February 5, 2012. In 2012–13, he started in 31 of his 32 games, and averaged 10.9 points and 5.2 rebounds in 28.9 minutes. He scored a career-high 23 points in a win at Colorado on January 12, 2013.[2] UCLA won the Pac-12 Conference championship that season. However, UCLA coach Ben Howland was fired after the season, prompting Wear and his brother to consider transferring. After meeting with incoming coach Steve Alford, the brothers were convinced they fit as starters in the new coach’s system.[4]

Wear missed the first three games of 2013–14 after he had an appendectomy on October 28, 2013. He came off the bench in his first six games before returning to the starting lineup. He was ninth in the Pac-12 in field goal percentage (53.0), and shot 44% on three-point field goals—including 10 of 19 in his final 16 games. He scored a season-high 16 points on 8-for-8 shooting in UCLA’s win over Stanford in the Pac-12 Tournament semifinals.[2] At the team’s annual banquet at the end of the season, Wear was presented with the Elvin C. Ducky Drake Memorial Award as the team member who exhibits tremendous competitive spirit, inspiration and unselfish contributions. He graduated after the season.[6]